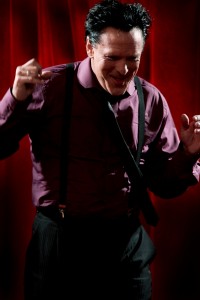 Christmas and the holidays are a time for family and giving to those less fortunate… even sometimes robbing from the rich and giving to the poor in traditional Robin Hood fashion.      It’s the end of the year and perhaps you’ve been working for a cheap boss… someone who has been taking advantage of you during this recession. Sometimes revenge is a dish best served cold as they say, especially with a glass of Egg Nog.

So put on Bing Crosby or  Vince Guaraldi (Yeah, that guy who did the Charlie Brown Christmas music) or maybe you have that damn Blackalicious – Toy Jackpot song stuck in your head (the Target rap song), whatever is the Christmas soundtrack in your mind, turn it on and find out how Michael Madsen rebelled against one Christmas Eve as we share his poem entitled: Christmas by Michael Madsen
I worked at a Christmas tree lot sometime in the early ’70s.
The exact year I don’t remember, and who really gives a shit.
Anyway, my boss was a real prick who cashed in on X-mas every year
and could care less about my skinny, freezing ass-
“Smile,” he said, “You got to smile more.”
Something I’d heard before and since many times;
I guess people like me better smiling
which is why I don’t very much.

“If you wanna sell those trees you gotta look happy…
make people like you.”

All I really wanted to do was smash him in the face…
But I stood. And I froze. And I walked. And I Sold. And I loaded
while he sat in his heated trailer like King Tut smelling his own farts
I imagined.
My mother was working two jobs.
It was Christmas Eve.
We didn’t have a tree.
So later that night, after all the station wagons had loaded
with their half-sucked lollipops stuck on the inside of their back windows
and driven away and the lights were out in the city
I went back to the lot, climbed over the back fence and
stole a tree.

I dragged it down the alleyway all the way back to our place
and put it on the back porch of the 1st floor of the shitty
two flat we were soon to leave from.