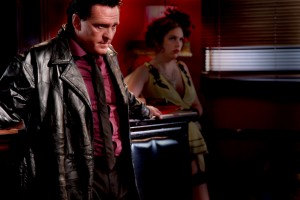 For those of you that have seen Michael Madsen in the film Donnie Brasco will understand the definition of “Fugazi.” For those of you that have not, think Cubic Zirconia. This poem illustrates the spurious, commercialized and capitalized context of a brand selling cool and the emptiness of the purchaser’s motivation. Whether fashion statement or a Fugazi, Caveat emptor (Let the Buyer Beware) You can’t buy the real thing.     — Michael P. Naughton Editor/13 Hands Publications

I went to a Levi outlet store to get some pants for my son.

Inside they had a lot of Levis’ stuff.

and nothing for me–

Which I would later find to be the case on a different subject.

A young kid working there, walking behind me,

Worn for the last 20 years on my back.

But later he explained that he and his father were going on  a trip,

Problem is, the store sells jackets that are sold fake.

Broke in by a machine of some sort.

Broke in to look real.

Bought at a price.

A real life bought for sale.

Even a bag for travel.

That looks 50 but never saw a road.

Or even an airport.

Made for some dummy to walk around like an imaginary James Dean or Dennis Hopper.

Never to know anything about what that really was.

You can’t buy a dream.

You can’t buy a life for any price.

You can’t be the real thing.

It’s not for sale.  The real thing is almost gone now.

It’s not for sale like Halloween  costume on Halloween.

Wear the coat/carry the bag

But there is nothing inside…