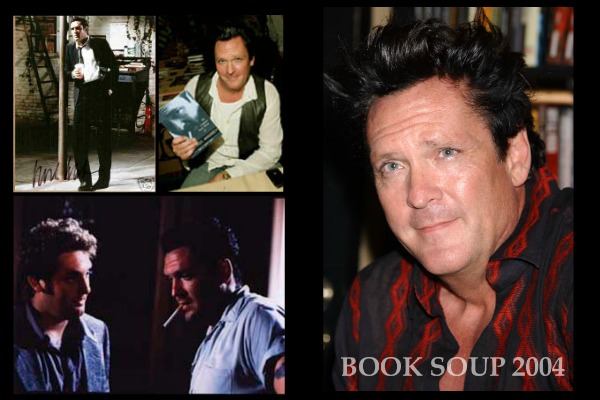 The most frequent question we hear: “What? Michael Madsen writes poetry?”

Yes, and he’s written a lot of it.  In 2005, there was enough previously published material and new material for 13 Hands Publications to compile The Complete Poetic Works of Michael Madsen, Vol. I: 1995-2005.  Since then 13 Hands Publications has released 3 additional poetry books, Signs of Life (2006), American Badass (2009), and Expecting Rain (2013).

Yes, Reservoir Dogs fans.  Mr. Blonde tough guy actor, Michael Madsen, writes poetry.  It’s biographical in nature and similar in style to Charles Bukowski.  Madsen often writes about his film work, his family, his perceptions of life, and things, and places.  He pulls no punches.  His viewpoints are quite frank.

Michael Madsen, most notably recognized for his work with Quentin Tarantino, is currently working on Tarantino’s Hateful Eight.  “…for me, the real journey that Michael, the writer, is exploring is what it means to be a man in a world where the notions of ‘manhood’ that some of us grew up with are barely remembered at best, or ridiculed at worst. But then if everybody embarked on the Hero’s Journey, everybody would be a hero, wouldn’t they?” —Quentin Tarantino

“When you open these pages you will be astounded by his insight into the minds and hearts of regular folks like you and me. He’ll make you laugh and he’ll make you cry and things will never look the same to you again.” —David Carradine.

“This actor is a poet…our best. I’m proud to know him a little. His words show me a lot about me. A laugh, a tear. He talks of now.” —Dennis Hopper

“You don’t expect a man best known for cutting off a cop’s ear to be an accomplished poet. Perhaps one of the great movie tough guys of the past twenty years or so, Michael Madsen doesn’t initially seem the type of guy to pick up a pen and ponder his innermost feelings. But, in addition to appearing in movies like Reservoir Dogs, Donnie Brasco, and Kill Bill, Vol. 2, he’s actually written several poetry books… Madsen isn’t prone to the pretentious self-important ramblings of many celebrity poets, but is honest, straightforward, at times profane… even his most bizarre musings seem to come straight from the heart. Much like his screen persona, his writing voice is witty, tough and oddly affecting. He’s often even profound, as in the touching, intelligent Yesterday, in which he reflects the part of his life that has passed. His writing, like his acting, is never boring and, often quite memorable.” —Amanda Cuda, Curled Up With A Good Book

“Actor and poet Michael Madsen presents Signs of Life, a stunning blend of full-color photography and free-verse poetry.  Featuring full-color photographs of unusual signs from hotels, diners, lounges, small businesses, and more, Signs of Life enhances the brilliant glimpses of Americana with scattering of free-verse poems, many of them about life on the road. A vibrantly distinctive compilation that smoothly fuses art, life, experience, and at the close, the tragic site of Terezin.  Terezin: We went to the camp today, / A place of death and horror, / A place like no other I’ve ever been. // Surviving. Alone. Lost and forgotten. / Left for dead – // Work will set you free: Arbeit Macht Frei” —Midwest Book Review (for Signs of Life).